He and his wife, Bella Kocharyan, have three children: Sedrak, Gayane, and Levon; all born in Stepanakert (Khojaly).

Kocharyan’s presidency witnessed two of the bloodiest events in post-independence Armenian history: the 1999 Armenian parliament shooting and the killing of ten people during the 2008 presidential election protests.

He has been held responsible for both events by the opposition, especially by Armenia's first president Levon Ter-Petrosyan and his party.

Both the 1998 and 2003 presidential elections were held in two rounds. They were disputed by the opposition candidates and criticized by international observers.

On July 26, 2018 the Special Investigative Service (SIS) of Armenia charged Kocharian with “overthrowing constitutional order of Armenia” during the final weeks of his rule.

The SIS asked a Yerevan court to remand him in pre-trial custody. On July 27, 2018 he was arrested. On August 13, 2018 Kocharyan was freed from custody following a court ruling, but remained accused of the charges he was arrested for.

On December 7, 2018 Kocharyan was arrested again following another ruling by the Court of Appeals.

Robert Kocharyan together with Serj Sargsyan was one of the main figures behind separatist movement in Nagorno Karabakh.

Acting as the 1st president of separatist regime and the 2nd president of Armenia Kocharyan promoted the independence ideas and did his best to sabotage peace talks with Azerbaijan. 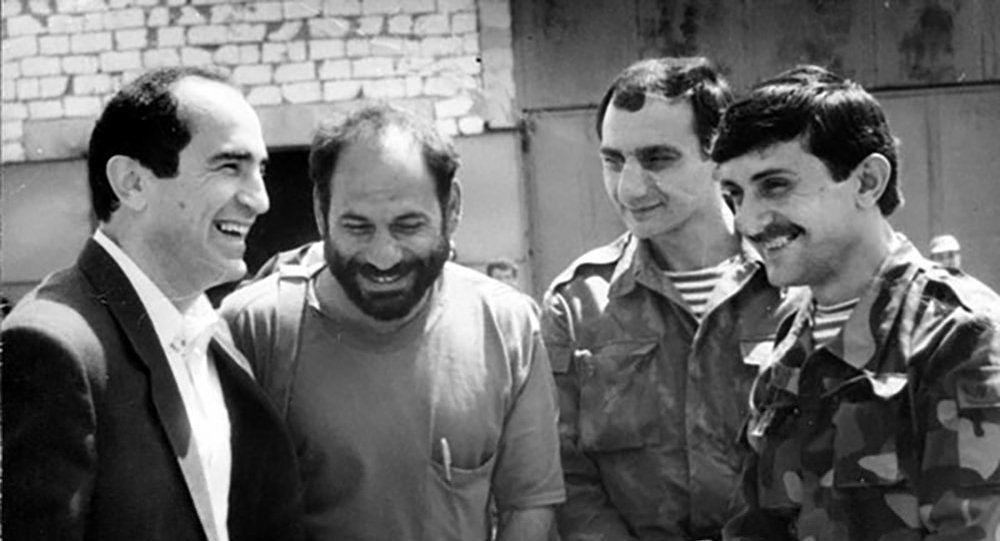 According to some reportsSerzh Sargsyan and his predecessor Robert Kocharyan entered the politics in Armenia from within the ranks of the separatist regime and transferred their oligarchic networks established in the occupied territories with them to Yerevan.

All major business enterprises in the occupied territories are established, financed and controlled by Armenian oligarchs with strong personal connections to Serzh Sargsyan and Robert Kocharyan, who reportedly control almost all of the most lucrative sectors and enterprises in Armenia.

It is apparent that no business can operate in the occupied territories without close connections to the Government of Armenia, which controls those territories militarily, politically and economically.

In 2006, Forbes published its only study of Armenia’s wealthy. Robert Kocharyan, a politician, not a businessman, was listed richest person in Armenia with over a billion dollars wealth.

In 2008, the Russian media estimated Kocharyan’s wealth at $4 billion.

According to Wikileaks cable named TYCOONS RELOADED: WHO CONTROLS WHAT IN ARMENIA Kocharyan and his family was close to Multi Group owner Gagik Tsarukyan who later supported Velvel revolution and Nikol Pashinyan (his party - Prospering Armenia is now the 2nd largest in newly elected Parliament).

In another cable named THE BUSINESS OF POLITICS: LEADING ENTERPRISES OF POLITICAL ELITES ambassador Marie Yovanovich reported that the murky ownership of Armenia's major industry clusters was a hidden driver of Armenian politics and elites' inter-relationships.

According to the cable “enterprises were divided into one of two major political/economic pyramids: one headed by President Serzh Sargsian and the other by ex-President Robert Kocharian. Having somewhat broken out of the Kocharian pyramid, parliament speaker Hovik Abrahamian headed what could become a third major cluster of business enterprises”.

As ambassador reported, Sargsyan and Kocharyan shared a significant amount of revenues from a number of government and business revenue streams. While unclear on how much revenues they shared in reality, it is safe to assume that the sources of this revenue stream included customs proceeds, bribes, and other illegal payments.

Sargsian and Kocharian reportedly each have ownership interests in mobile phone operators VivaCell-MTS and Beeline (Armentel).

It is widely accepted by the general public in Armenia that its natural resources, including the lucrative gold mines, have found their way under the influence of Robert Kocharyan and Serzh Sargsyan, along with others at the centre of power.

Whole swathes of farmlands in Zangilan, Gubadly and Jabrayil, along with occupied parts of the Fuzuli and Aghdam districts eventually were incorporated under gold mining production companies  owned  by  Kocharyan  and  Sargsyan and their closest circle.